The NSCF Grand Prix Awards for the 2012 – 2013 season were awarded at the first NSCF tournament of the new school year. The overall Grand Prix winner is Shawn Cobb. This is the third year in a row Shawn has won the overall championship. He also won the Middle School Championship for 2009 – 2010. Shawn has been a very active participant in NSCF tournaments over the last 6 years with over 70 events to his credit. He’s played in a number of events in New York City, and has won over 60 trophies. 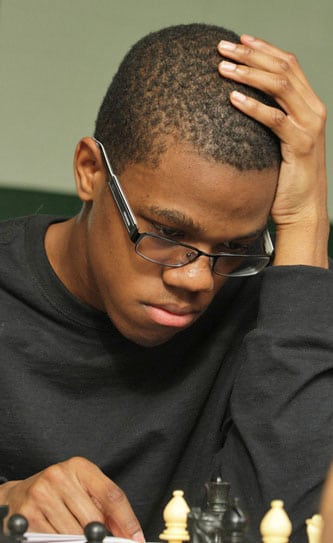 Shawn is an 11th grader at Montford Academy in Mount Vernon. Shawn’s cousin, NSCF instructor Tharin Chadwick (AKA Dr. Chess) taught him how to play when he was around 6-7 years old.  He played in his first tournament in 5th grade. He moved up quickly from 2-5 Novice to Elementary. His first rating was 838 and has climbed steadily up over 1700.

With such steady improvement I wanted know more about what he was doing in terms of training.

Polly: Have you done any NSCF classes?

Shawn: No when I was at Chapel the classes were for kindergarten to 5th grade. I have attended the NSCF summer camp for a few years.

P: Do you study on your own?

P: How long do you study and what do you use?

S: I try to study 1 to 2 hours several days a week. I use different books and games.

P: What books do you use?

P: Any favorite player whose games you study?

S: No. I look at a lot of different games.

P: Do you like the old players or the newer players?

P: Do you also play on the Internet?

S: Bullet has helped me a lot with tactics. 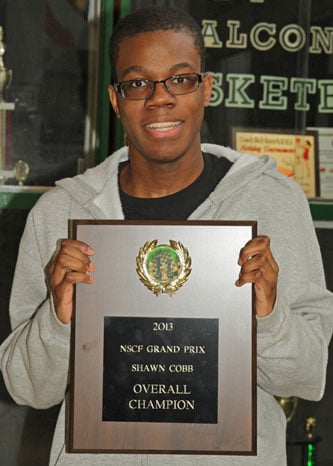 P: How do you feel playing so many players that are much younger then you?

S: They started much earlier then me.

P: So you didn’t start playing tournaments until 5th grade and you sometimes play kids in lower grades?

P: Do you feel funny playing much younger kids?

P: You’ve won the overall championship 3 years in a row. Are you going to go for four in a row?

S: I’m still thinking about it.

P: School’s getting harder and not so much time to play?

P: Any specific goals in chess?

S: I’d like to become at least an International Master.

P: Any advice you would give up and coming players:

S: No matter how hard it is; keep striving towards your goal.