Led by NSCF instructor and coach, Nolan Kordsmeier, the co-ed chess club first started at lunchtimes in 1982. It grew to 145 players in 2012 with 72 participating in tournaments throughout Westchester County and southern Connecticut during the past school year and regularly winning top team and individual prizes. 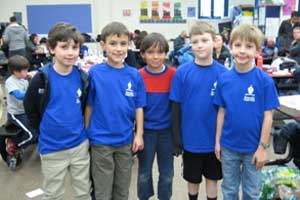 But the real excitement for the year came in Nashville in April. Bronxville was able to send a team of 19 players ranging from second to seventh grades and competing in five different divisions. This was the fourth year Bronxville was able to send a team to a national championship and this year was extra special. Every four years, the United States Chess Federation (USCF) brings together elementary, middle, and high school students in one competition known as “SuperNationals.” This year’s competition broke the record for the largest rated chess competition in USCF history, with 5,335 participants.

The students all played seven games over the three-day tournament, with many of the games lasting two to four hours. Coach Nolan was assisted by fellow NSCF instructor and coach Jim Santorelli; together they worked with the team over the course of the weekend, preparing for matches, reviewing games, and maintaining focus in the intense environment. The work showed Bronxville is a force to contend with on a national level. 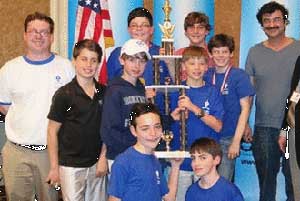 In the highest and most competitive section for the elementary tournament, Championship K-6, six players competed, and they achieved a very impressive sixth-place finish. In its largest division, the K-6 under 1000 section, Bronxville won third place out of 46 teams!

Bronxville has made a special effort to recruit girls to both recreational and competitive play with Polly Wright of NSCF conducting a girls’ class. Polly sends a special congratulations to Alisa Kanganis, who took 25th place out of 315 participants in the K-6 under 1000 section.

Shenan Golimbu is co-chair of the elementary school chess club and enjoys working with fellow parents and teachers and is especially proud of the children. “While it is competitive, we have found it to be very collaborative, with kids teaching each other and wanting to share their skills. I think it’s rare for children this young to be able to sit still and focus for as long as two hours.”

While the club is still getting organized for the 2013-14 school year, Coach Nolan is promising another year of success as the team works towards the National Elementary School Championship which will be held in Dallas in May. And team members who have graduated to middle school will be participating in the National Jr. High Championships which will be held in April in Atlanta.

(Special thanks to Carol Bartold and Jocelyn Angelone for the material in this article.)