Fun for All at NSCF Chess Event 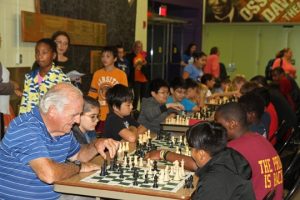 Despite persistent rain and gusty breezes, over 150 children and parents came out for an afternoon of chess on Columbus Day at the New Rochelle Public Library. The event, produced by the National Scholastic Chess Foundation, featured open play for all ages and abilities, and a simultaneous game where NSCF instructor Ricardo Perez Billinghurst, a National Master, prevailed over 20 challengers from New Rochelle Public Schools. The event celebrated the vibrant chess culture that has grown in New Rochelle since NSCF first began teaching chess in the classrooms and in afterschool over 27 years ago. The afternoon culminated with the presentation by NSCF Executive Director Sunil Weeramantry and New Rochelle Mayor Noam Branson of the 2017 Scholastic Service Award for inspiring and mentoring young chess players at Columbus Elementary School to Mark Hegenauer, an ESL teacher who has been incorporating chess into his instruction for 20 years.

In selecting Mr. Hegenauer for the award, Mr. Weeramantry noted that “Mark is an example of what the NSCF has been encouraging with its teacher training initiative as we are training teachers of any subject to be able to teach chess, at least at the introductory level.”

“A lot of schools have these highly-rated chess players as instructors,” Mr. Hegenauer explained. “I’m not a tournament chess player and I didn’t grow up playing chess. I am an ESL teacher and that is really my main focus. But I definitely see the benefits of teaching chess and how it helps students of every ability level, especially the students I serve. They have to shake hands and they have to make eye contact. When I first play a child, I will hold the handshake until they make eye contact. I know it’s just a board game, but the kids are socializing and interacting with one another and that is so needed today.” 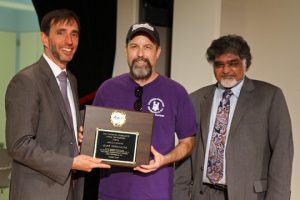 The award was presented by New Rochelle Mayor Noam Bramson and Mr. Weeramantry. Columbus Elementary principal Michael Galland also spoke at the event and shared his commitment to continue to build school’s chess program. The parent coordinator for Columbus Elementary, who also helped organize the Chess at the Library event, Joan Waldron was thanked for her continued service to the school. Even though her own son is now in 11th grade, Joan has continued to support chess at Columbus Elementary. “I don’t know if I would have continued without her ongoing support,” Mr. Hagenauer said.

Other attendees included Shannon Mauge McCullough, who learned chess as part of Mark’s inaugural class and participated in NSCF chess tournaments back in 1999. Today Shannon has a degree in materials science and is a substitute teacher in the New Rochelle schools; he and his mom, Michelene, came to show their support for the on-going value of chess in education. Another former student who came is Zaleik Walsh who is now a student at New Rochelle High School.

These photographs, courtesy of the NSCF’s own Polly Wright, capture the event: Above 1) NSCF Instructor Mike McDermott with kids; 2) Mayor Bramson and Sunil with Mark Hegenauer. See more photos in our Community Engagement gallery!