FIDE Master Tells About His Start 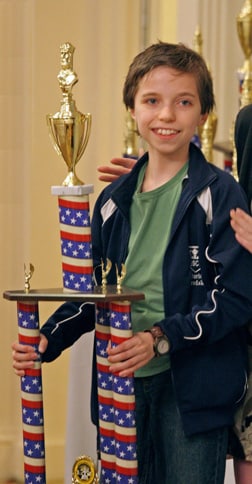 The very first tournament I played was a NSCF tournament. It was 5 years ago. I was 7 years old and unrated. I felt no pressure and just had fun. I won the Novice section with 4/4 and a first place trophy. I was hooked.

I liked the tournaments. They were a lot of fun and were well organized. I always looked forward to them. My goal was to win the 2010-11 Grand Prix, which motivated me to play more often and improve. And I did win.

I also attended a couple of summer camps and enjoyed them. I made friends and am still in contact with some of them.

I will always look back at my time at NSCF events with fondness. It was a perfect place for me to start. The tournaments provide a great environment and opportunity for upcoming, young chess players.

Playing NSCF tournaments prepared me for future tournaments with adults and kids alike. In 2014, I won the North American Youth Championship Under the Age of 12, earning the title of FIDE Master. I am currently rated over 2300 USCF and ranked #2 in the US for 12 year olds.

UPDATE; David is now an International Master, well on his way to earning his Grandmaster title, and is one of the recipients of the 2020 Scholar Chess-player Awards.