Participation has increased this year with 42 boys active in the after school chess program “Chess Encore;” 33 boys also play on the Brunswick chess team with many more coming to tournaments than ever before. In the November NSCF tournament at Greenwich Academy, 31 played with many scoring in the top 4 as individuals and team prizes of 1st place in the Championship, Primary and K-1 sections, 2nd place in Reserve and 3rd in Primary Novice. Brunswick School is a boys-only K-12 institution in Greenwich, CT, and “brother school” to Greenwich Academy, the all-girls school nearby. 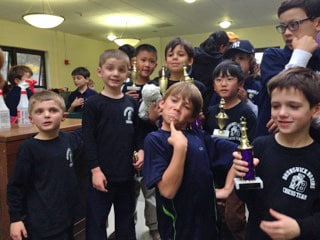 The Brunswick chess team credits their success to playing lots of chess and the hard work of their NSCF instructor and coach, Danny Rade, who keeps them motivated. 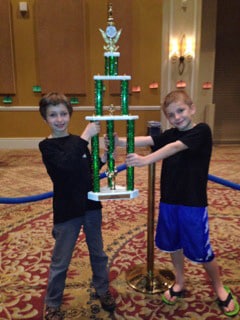 Her oldest, Luke, is in third grade. “I taught him to play when he was around 4,” Jackie said. “He was bored in preschool. He took to chess immediately and he still loves it. The results speak for themselves. Luke became more focused. He thinks through problems more carefully. My twins (1st graders Mark and Carl) were a little slower to get into it, but when they saw how Luke was doing, they thought it was cool.”

The only downside: having her kids argue through their cases when they want something she doesn’t want to give them. “On the one hand, you’ve made a decision as a parent. On the other, you have to be proud when they can present their reasoning. They definitely think strategically and work out all the contingencies.”

As parent coordinator, Mrs. Homan sends our a weekly email to parents to remind them of all the tournaments in the area. She admits it’s hard to get folks to cross the state line back into Westchester or the city on the weekend, but the Brunswick kids are playing in more tournaments this year and are seeing positive results. William Ewald recently saw his rating jump to 1530 while little brother Thomas is close on his heels at 1353.

Most importantly, the kids are having fun while competing in an academic sport. “Having more kids participating is important,” said Mrs. Homan. “When so many showed up at GA in November and then did so well, it was a fun day for everyone.”