Chess in the Park a Grand Success

The rainy forecast did not deter over 100 area chess players who came out for Chess in the Park held on Columbus Day at Library Green Park in New Rochelle.

Mayor Noam Bramson welcomed the crowd and made the ceremonial first move as players of all ages and abilities participated in open play with local masters and attended chess talks with NSCF instructors National Master Ricardo Perez and FIDE Master Sunil Weeramantry. 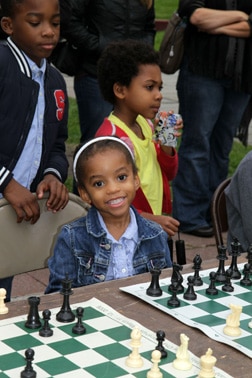 The highlight of the day was a simultaneous exhibition by six-time National scholastic champion 15-year old Joshua Colas, a Westchester resident. Josh was the youngest African American ever to achieve the title of master, a feat he accomplished at the age of 11.

The NSCF offers either curricular or after school programs in over 70 schools throughout Westchester County, and Greenwich including 7 schools in New Rochelle. The NSCF also runs a Grand Prix chess tournament series with 20 events scheduled for the 2014-15 school year which starts in New Rochelle at Columbus Elementary on Saturday, November 1st.

See more photos from the event on our Community Engagement gallery page.