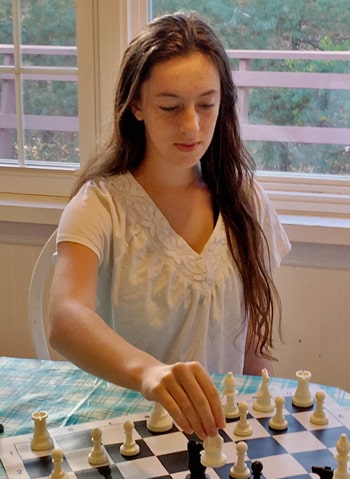 “I’d really like to get above 2000. That’s my goal,” says chess player Danielle Sharp. “Having a goal encourages me to focus.”

Danielle learned to play chess from her parents while still in elementary school but she didn’t start playing in tournaments until 8th grade. After playing her younger brother, Danielle asked her parents where she could play near her Yorktown Heights home. They did an internet search and found the NSCF.

Her first tournament “was fun but then I wanted to get better,” so Danielle started to read some books from the library on chess tactics and strategies. She has continued to be mostly self-taught and says she practices primarily by playing online several times each week. “I do my homework first, then, if there’s time, I’ll try to play a few games.” Danielle will occasionally play her friends but they are not competitive players. Asked about her favorite memories from chess so far, Danielle said winning the 2015 Grand Prix was the best and another was beating a player with a significantly higher rating during the New York State Scholastic Championship in Saratoga Springs.

This year, Danielle is in 11th grade at Yorktown High School where her favorite subjects are math and Spanish. She says she hasn’t started thinking about which universities she might like to apply to but is interested in engineering. And she plans to continue playing chess. With her rating now up to 1730, Danielle is well on her way to achieving her goal and we’re sure she will set new goals once she reaches it.