More than just a game, throughout its history chess has had an intrinsic relationship with cultures around the world. From its origin in India over 2500 years ago, through the Renaissance and into modern times, chess has been a source of inspiration for painters, sculptors, musicians and writers. As part of its mission to increase appreciation for chess, The National Scholastic Chess Foundation (NSCF) partnered with European composer, Jason Kouchak, to present an afternoon performance entitled “The Queen’s Journey: An Exploration of Chess, Music and Dance”. 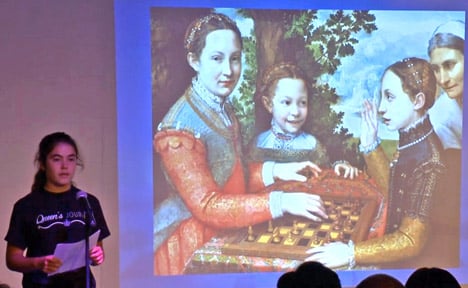 In chess, the Queen symbolizes both grace and power. Her movements were celebrated in dance by ballerina Adrianna Aguilar to music written by Mr. Kouchak, who first presented his chess and ballet concept at the British Museum in 2015. The performance included other chess-inspired music by Mr. Kouchak as well as a brief history of the evolution of the queen selected from a new book “Great Moves: Learning Chess Through History” (Mongoose Press). The performance also included an example of how chess can inspire collaboration demonstrated with a group game played by eight girls from different NSCF chess programs in New York City, Westchester and Fairfield Counties.

“Each game of chess is like a new melody which beautifully resolves at the end of a journey,” said Mr. Kouchak in explaining how chess inspires some of his music. “I hope by using a combination of chess, music and ballet we can inspire and inform children of the importance of coordinating together and moving forward in the future together. This performance combines the visual aesthetic, melody and movement to remind us that the game is always greater than the player.”

“Across America, there is an emphasis on chess as a competitive activity,” said Sunil Weeramantry, NSCF Executive Director. “While that is one component of the NSCF programs, we also want to restore the game’s position within the culture. Our goal is to encourage an appreciation of the elegance of chess and an understanding of its history.”

The inaugural performance of “The Queen’s Journey” was presented to a packed house in a small theater at ArtsWestchester in White Plains, NY. “There was so much interest we quickly realized we needed a larger space,” Sunil said. “We are looking forward to producing the event again in a larger venue and we hope to share “The Queen’s Journey” with other organizations that are trying to encourage greater interest by girls and expanding the discussion of how chess connects with our broader culture.”

For video highlights of “The Queen’s Journey” click this image.

You can also see the full video of the ballet “Reflections” featuring Adrianna Aguilar, of “Queen of the Castle,” featuring Carolyn Weeramantry on violin, and of our NSCF chess queens performing “Life Into…” by clicking these links. And, for more photos, visit our Special Events gallery.