In his celebrated work, “Frames of Mind: The Theory of Multiple Intelligences”, noted psychologist Dr. Howard Gardner uses chess as an example of visual-spatial intelligence.  Indeed, visual memory plays a crucial role in chess and often manifests itself in the form of pattern recognition.  While no two situations may be identical, significant elements could be similar and help trigger a familiar pattern.

Here is a position that arose in the final round of the 2002 U.S. Amateur Team East. Then IM Hikaru Nakamura is playing Black for the “Weera Family” team against Senior Master Shelby Getz of “Ham Samisch on Rye”. Black is a pawn ahead in a rook and pawn ending. The winning technique requires applying “mathematical precision” to force the pawn through.

White, to move, forces the Black king away from the support of the pawn, then moves behind it again, with 1.Rf8+ Ke1 2.Rg8. Black then forces the White king back with 2…Ra3+ 3.Ke4, and plays 3…Kf2, once more threatening to queen the pawn.

Take a glance at the last three positions and review the move sequences that produced them. Through repetition of the same pattern and procedure Black has continually moved his king up and White’s king back.

Black can stop now and “build a bridge” to protect his pawn from attack. Thus, after 7.Rf8+ Kg3 8.Rg8+ Rg4 the pawn will queen.

Instead, he opts to further the amusement by continuing the procedure and driving the White king back even further before building a bridge:  7.Rf8+ Ke3 8.Rg8 Ra5+ 9.Ke6 Kf3 10.Rf8+ Kg4 11.Rg8+ Rg5 and at last the pawn will queen.

Mathematical? Yes. There is a concept in mathematics and computer science called recursion. It is the successive repetition of a process, repeating a pattern and producing results that are fed into the next iteration of the process.

For example, the Fibonacci series 0,1,1,2,3,5,8,13,… is produced by starting with two numbers and successively adding the previous two numbers to produce a new, higher number. Note that the first few steps in the winning chess sequence above are recursive, repeating the pattern to move both kings higher up the board, and incidentally illustrating a kinship between chess logic and mathematical logic.

If the defending rook is one rank closer to the attacking king and pawn, a further winning ploy appears, one that introduces a geometrical element – the boundaries of the chessboard!

This is illustrated by the following 1890 study by Lasker that may have inspired Hikaru:

Here it is White to play and win.

Note that the Black pawn on the second rank precludes the possibility of winning by building a bridge, because White’s rook can’t leave the c-file.

Now Black still has to check and go back to attack the c-pawn, because White is threatening Rxc2.

The importance of the geometry (or topology) of the chessboard is highlighted by this observation by John Nunn, in his entertaining and informative book, Tactical Chess Endings:

“The board is just small enough for this to work. If there were nine ranks instead of eight the position would only be a draw!”

When we think about the geometry of the chessboard we soon discover that it has its own rules. In particular, a straight line is not the only way to minimize the distance between two points.

The most striking example of this phenomenon is shown in this well-known 1921 endgame study by Richard Reti.

At first glance, the situation is hopeless for White. The Black pawn will queen in 4 moves, and the White king is 3 moves behind.

On the other hand, the Black king can capture White’s passed pawn in just 2 moves, while the White king needs 4 moves from supporting it.

Must White resign? Not if he recognizes that he can move as quickly on the diagonal as on the file. 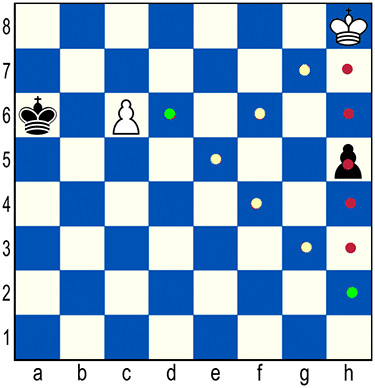 So White starts with 1.Kg7!

©Ed Eusebi. Ed is a Candidate Master in both over-the-board and correspondence chess. He has served chess as a coach, organizer, tournament director, and website content editor. Ed is the co-author, with Sunil Weeramantry, of Best Lessons of a Chess Coach.