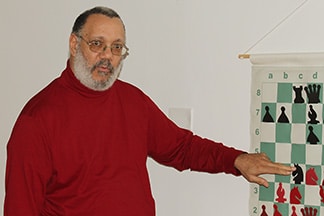 NM Chris Welcome has been teaching chess to children since 2000. He has taught chess within the curriculum in over 30 public schools. Chris has also coached several school teams to success in national competition, and guided three young players over the 2000 rating level.

Chris was part of a group in Brooklyn called the “Black Bear School of Chess” which fostered the growth and development of many African American chess players in the late 1970s. Many masters emerged from this group, including Ernest Colding, Ronald Simpson, William Morrison, and GM Maurice Ashley. Chris earned his National Master’s title in 1982. 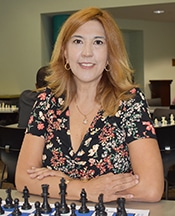 WFM Dr. Amelia Hernandez is a Womens FIDE Master who was a 6-time U-20 National Champion and 5-time Women’s National champion in her home country, Venezuela. She was a World U-18 Girls Champion, and also won a Gold Medal at the 1994 World Chess Olympiad in Moscow. Amelia is the youngest member ever inducted into the National Sports Hall of Fame. Amelia left competitive chess to become a medical doctor. She returned to chess almost 30 years later, again winning the Venezuela championship.

Amelia emigrated to the United States in 2019 and is the elementary grades chess teacher at the Franklin Academy Charter School in Sunrise. She also works with the NSCF’s Sunrise Center for Excellence in Chess. IM-elect Joshua Colas was the youngest-ever African-American to become a National Master, a feat he accomplished at the age of 12. Josh has completed the required “norms” and will be awarded the International Master title when his FIDE rating crosses the 2400 threshold.

Josh has frequently appeared at NSCF public events and has taught in our summer camps. Josh got his start taking lessons and playing in NSCF tournaments while attending White Plains Public Schools. In 2020, Josh graduated from Webster University in St. Louis which he attended on a “full-ride” chess scholarship and studied under famed chess coach Grandmaster Susan Polgar. 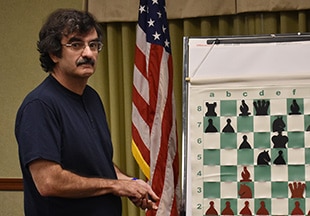 Jim Santorelli  is a USCF Candidate Master, and is also the Associate Executive Director of the NSCF.

Jim has been teaching chess for over 30 years and can count 13 National Champions among his students. He is known for his tremendous ability to motivate young players.

Jim was the “architect” for the successful Greenburgh Central 7 Schools chess program which continues to this day. He was also the coach of the Woodlands Junior High School chess team that won the USCF National JHS Championship in 1996. Jim continues to teach in NSCF chess programs in Westchester and Lower Connecticut. 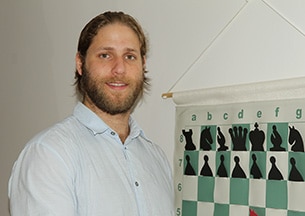 Danny Rade is a USCF Candidate Master. Danny grew up in New York in the 90’s playing many of the same tournaments in which his students now compete. This enables him to draw upon his own childhood experiences when teaching young players. Danny finished in second place at the National K-12 Championships in both 5th and 7th grade. At 14 years old, he was nationally ranked #14 for his age group.

Danny graduated from Washington University in St. Louis in ‘09 with a BA in Psychology and Economics. He has worked as an NSCF Instructor for over 10 years. NM Nicholas Rosenthal is a National Master who has been playing since the age of 9, and has been teaching chess for the past 7 years. Nicholas has won a number of Florida State and National Championships. He shares his valuable tournament insights to help his students improve.

A graduate of South Plantation High School, Nicholas attended Lindenwood University on a chess scholarship, and served as the chess team captain during his final two years. After earning his degree in sports management, Nicholas returned to South Florida and joined the NSCF/Sunrise team in 2020.